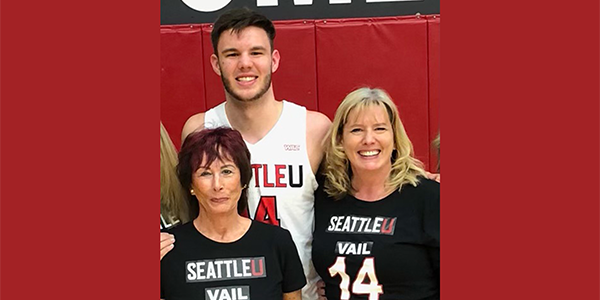 Loyal Seattle U sports fans know the O'Brien name. Terry was married to Eddie O'Brien for almost 25 years. Eddie was one-half of the legendary O'Brien twins, who lifted Seattle University athletics out of obscurity and took the men's basketball team to the NCAA tournament for the first time in 1953. Eddie went on to play major league baseball and then returned to Seattle U as the Athletic Director from 1958 – 1980. He also served as the Seattle U baseball coach for 14 of those years.

When Eddie passed away in 2014, Terry took the baton and became more involved with Seattle U Athletics as a volunteer and donor. She knew her passion was in honoring Eddie's life and career. "Both Eddie and Johnny were so grateful for the scholarships they received to go to Seattle U," Terry explained. "Ed built his life around giving back, especially to the athletic program and university that gave him so many great opportunities. It's been really meaningful for me to see the SU athletic programs continue to grow."

Terry, along with Eddie's many friends, created the O'Brien Endowment for Athletics in Eddie's memory. She is committed to making regular gifts to build the O'Brien Endowment, which generates unrestricted operating funds for the athletic department. She even included a gift by will in her estate plans to help continue building the fund into the future. Just a couple of years ago, it was Terry's accountant who pointed out to her that she could be using stocks to make current gifts to the endowment, rather than writing checks. The accountant explained that because Terry had been holding on to low-basis stocks for many years, and the value of those shares had increased over time, she could make gifts by transferring stock directly to Seattle U. This way, Terry is able to forego having to pay any capital gains tax, which she would have to pay if she sold the shares, and can claim a charitable deduction for the full current market price of the transferred shares. Seattle U then sells the shares and adds the proceeds to the O'Brien Endowment for Athletics. Terry says, "Everybody wins. It's easy for me, and I know I'm helping to create a great experience for our student athletes."

Terry's goal is to see the O'Brien Endowment reach a balance of $1 million, so that it can have an even bigger impact on supporting more than 350 remarkable student athletes competing in 20 different Division I sports. Student athletes at SU consistently hold a 3.3 cumulative GPA, maintain a 95 percent NCAA Graduation Success Rate, and have won several community service awards – all while giving fans a lot to cheer about in the Western Athletic Conference and the NCAA!

Today, Terry's connections to Seattle U Athletics are stronger than ever, with her grandson, Matt Vail, Class of 2022, playing forward on the men's basketball team wearing number 14. Matt's mom, Jill, is also an alumna having earned her MBA from the Albers School of Business and Economics in 1994. Thanks to Terry's vision and passion for honoring Eddie's legacy, it seems that for generations to come, student athletes and sports fans alike at Seattle U will know the O'Brien name.

Click here for Seattle University's stock transfer instructions. Or, simply reply to this email if you have questions for a member of the Gift Planning team and would like to learn more about giving assets to support your financial and philanthropic goals.