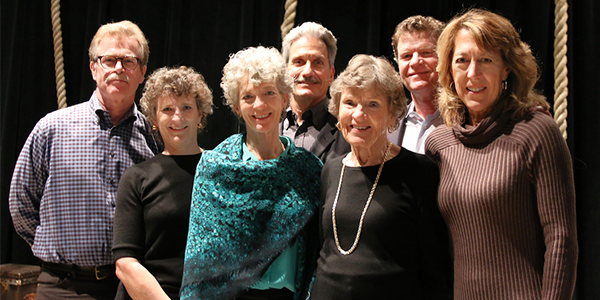 Jeanne Marie Lee's ties to the Jesuits began early in life. Her father, who had attended Seattle College for high school in the early 1900's and then Gonzaga, was a great admirer of the Jesuit priests at St. Joseph's, the family's home church on Capitol Hill. Jeanne Marie has memories of growing up with Father Raymond Nichols, S.J., and Father James McGoldrick, S.J. She attended Holy Names Academy and then Seattle University.

A literature major at SU, it was a religion class that had the biggest impact on Jeanne Marie's life. There she met her future husband, Rhoady Lee, a business major and member of the SU ski team. She and Rhoady married in 1951.

While attending SU, the Lees began a 30-year friendship with University President Albert Lemieux, S.J. He recruited Rhoady to join the Alumni Board of Governors, initiating the Lee's long history of service to Seattle University. Later, the Lees developed a friendship with Father Lemieux's successor, William Sullivan, S.J.

Education has been at the center of the Lee's charitable giving. Their direct contributions have supported student scholarships and many building projects including the new home for the School of Theology and Ministry and the Student Center. They were also the lead benefactors in making the Chapel of St. Ignatius possible.

"Our giving has evolved over the years," says Jeanne Marie. "We are comfortable now, but it wasn't always that way. The first gift we ever gave was a stretch because we didn't have much then, but it felt good to be part of something important."

In addition to direct giving, the Lees have included Seattle University in their estate planning through a charitable remainder trust, which they funded with appreciated property. The trust terms provide Jeanne Marie with income during her lifetime.

"The goal is that Mom won't have to take the income stream," says daughter Maureen Lee, who helped set-up the trust, "but it's there if needed -- a safety net. Otherwise, the money is kept in the trust and reinvested. A share of the trust will pass to the Sullivan Leadership Scholarship Endowment and the Institute of Catholic Thought and Culture Endowment upon her death, when the trust proceeds are distributed."

"The Sullivan Scholars are a remarkable group of young people," says Jeanne Marie. "I never cease admiring the university that gives such opportunities to those who accept the honor and fulfill the expectation of their scholarships."

Growing up, Maureen remembers her parents' connection to SU through their enduring personal friendships with the Jesuit priests.

In 2005, Maureen, her five siblings and their spouses decided to make a substantial donation in their parents' name to something that Jeanne Marie and Rhoady held dear. They chose Seattle University, and their gift established the Lee Center for the Performing Arts.

The performing arts are a passion for Jeanne Marie. She was a soloist in the a cappella choir, sing in the "Double Quartet," and had lead roles in the SU Opera Guild's 1948 production of H.M.S. Pinafore and its 1951 production of New Moon.

The above photo of Jeanne Maria, surrounded by her children and their spouses, was taken at the 10 th Anniversary celebration of the Lee Center for the Arts on November 16, 2016.