"It's going to transform every student, the university and the community." — Carol Ann (Conroy) Barnickol, '64

When Seattle University donors, Carol Ann and Karl Barnickol, decided to support the nationally acclaimed Seattle University Youth Initiative (SUYI), they had very clear reasons for their generosity. "When I served on the Board of Regents, I was struck by the potential of the SUYI," said Carol Ann, a social worker. "Karl and I realized where the Youth Initiative could go under the leadership of Kent Koth, the director of the SUYI and the Center for Service and Community Engagement. Now we have met so many students who say this program has changed their lives. We're already seeing positive results in the community. The impact on the university will continue to be huge." 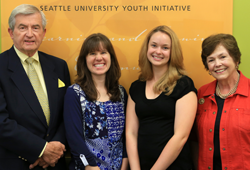 The Barnickols' giving has supported two graduate student assistants who play a vital leadership role in the Youth Initiative. Today Carol Ann and Karl are increasing their support of the program to fund four graduate assistant positions and provide funding to take quick advantage of new opportunities for the SUYI. They are donating through an IRA Charitable Rollover, a giving option for 2013 only, with significant tax benefits for certain donors. We had the opportunity to sit down and talk with Carol Ann and Karl about their gift to the SUYI and their choice of a Qualified Charitable Distribution from an IRA to continue their support.
The Seattle University Youth Initiative is a groundbreaking program which unites the university with the Bailey Gatzert neighborhood, just south and east of campus. The goal of the program in this low income area is to improve the academic achievement of more than 1,000 neighborhood children, while expanding awareness and involvement among SU students, faculty and staff. In 2012 the SUYI received the Presidential award for Community Service, the highest recognition for a university's commitment to the community.


"Anyone who is interested in making a charitable gift should take a look at the timing opportunity in 2013 to significantly mitigate your tax liability."

SU Planned Giving: What inspired you to be a supporter of SUYI?

Carol Ann: All you have to do is visit the Bailey Gatzert School to see the impact the Youth Initiative is already having on the children there. Some day in the future a current Bailey Gatzert student may have the opportunity to attend Seattle University and return to their former elementary school as a volunteer or even as a teacher.

SU Planned Giving: As a volunteer and a donor, what would you like to share with others about this experience?

Carol Ann: We have met many SU students who have told us that their involvement with the SUYI was life-changing. These students carry their community involvement experience into the wider world after graduation and the ripple effect is astonishing. That is a Seattle U tradition.

Even if you aren't in the Seattle area—Karl and I live in St. Louis—you can still make a difference. It's not only about giving money; it's about being engaged in a meaningful way in your community and with Seattle University.

SU Planned Giving: Can you share more with us about the IRA Charitable Rollover that you're using this year in making another contribution to SU?

Karl: The IRA Charitable Rollover is an opportunity in 2013 only. For people 70 ½ or older who are required to take a Required Minimum Distribution from their retirement plans, this is a near-term opportunity to make a charitable gift and significantly mitigate your tax liability. We are certainly taking advantage of it.

SU Planned Giving: Would you recommend that others consider a similar gift?

Karl: Yes, for people who have to take a Required Minimum Distribution this year and may not need the additional income, it's a terrific opportunity from a timing standpoint to make a meaningful gift.

These unique, one-time opportunities show up in the tax law every so often and this is a really good one for those in this age group. You may see this type of gift referred to as a Qualified Charitable Distribution. It's important to realize that the process of initiating and completing a Qualified Charitable Distribution from an IRA can take up to a month, so don't wait until Christmas time to contact the custodian of your IRA.

For sample instructions for your IRA custodian or for more information Seattle University Planned Giving Office at phone number 206-296-6974 or email the office at plannedgiving@seattleu.edu.